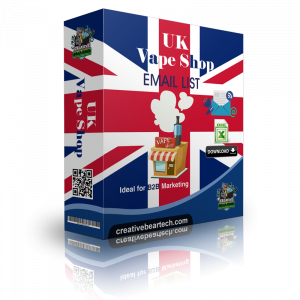 Here is what the UK Vape Shop Database Contains

Why choose us for your UK Vape Shop Marketing List

The Vape Industry: From the Bird’s Eye

Winter was waning in the D.C. adjacent border community of Silver Spring, Maryland on Tuesday, March 5th. While most offices on the East Coast were getting ready to wind down for the day, the office of the Federal Drug Administration had a national spotlight drawn on it. In a press release, FDA Commissioner Scott Gottlieb announced his resignation. A stormy path had been navigated by Gottlieb, often running afoul of both sides of the vaping debate. But his departure left the vapor industry in a state of flux. As Gottlieb exited his position at the FDA, new draft guidance was issued moving the Premarket Tobacco Authorization (PMTA) period for vape up from August 8th, 2022 to 2021 – and more importantly – proposed ending its tolerance of flavored vape juices.

Further complicating this news was the appointment of Acting Commissioner Norman Sharpless, whom has publicly expressed support for Gottlieb’s approach to regulating vapor products. The FDA’s approach was thrown yet again into deeper chaos in May when a Federal Judge struck down the FDA’s proposed date of August 8th, 2021 for enforcing PMTA applications and demanded they begin reviewing applications immediately. While the FDA has yet to appeal this ruling, it points to a continuing trend of combative governmental oversight of the vapor industry.

This all comes at a critical juncture for the vapor industry. As challenges to vapor packaging emerge from the Consumer Product Safety Commission (CPSC), external pressure has been pushing on a vape industry trying to quietly continue doing business. Thousands of companies, brands and shops have been struggling to make sense of an increasingly grey visage of the near future. Historically, despite offering compliance deadlines and requirements, the FDA has been loath to stick to any guidance it has issued. Other than letters and incidences of public shaming, the FDA has – seemingly arbitrarily – shift compliance deadlines and failed to enforce any of its proposed policies across the vapor industry. This lackadaisical approach to regulation has left many in the vapor industry frustrated as they sought to comply with the FDA’s exacting standards and expectations for regulatory filings and compliance deadlines.

A natural response to these actions by the vapor industry has seen many vape companies expanding beyond the vapor industry. The passing of the 2019 Farm Bill opened up the opportunity for the sale of cannabidiol (CBD). While this is still very much a legal grey area until outright legalization of hemp and cannabis is codified into Federal law, it has spurred a confidence in vape companies to diversify outside of the vape industry and into CBD. This isn’t possible for every vape company financially, but entrepreneurs in the vape space are in search of stability the vape industry looks increasingly unable to afford. The vape industry however isn’t all doom and gloom however.

The vapor market has continued to expand among traditional vape businesses, with the American vapor industry pulling in over $13 billion annually. New shops continue to open and the array of products continue to innovate. But that innovation has been disproportionately fueled by the advent of pod systems. The JUUL from JUUL Labs has become a juggernaut in the vaping world. After investment from Altria, JUUL is expected to account for over a 1/5 of the vape market by itself as it is forecasted to hit $3.4 billion in sales. While this performance is impressive, the impact that JUUL has left on the market has been mixed. The modern teen vaping epidemic has been fueled, in no small part, by illegal acquisition of JUUL devices and pods by underage vapers. The rise of the verb “JUULing” has become the most familiar term to consumers outside the vapor industry for vaping. For many, it is the only term they will ever know when it comes to the vapor industry. The public outcry following reporting and studies on the vapor epidemic have done immeasurable harm to the public perception of the vapor industry, with parents and public health groups aggressively conflating the vapor industry as a whole with JUUL’s pod device. It becomes incredibly difficult to see a path forward to reclaiming the public image of vaping as a vanguard for good or a product for smokers looking to transition away from combustible tobacco. This negative public perception may not be the albatross on the neck of the vapor industry it may seem. A central tenet to the vapor industry’s ideology since its inception has always been to appeal to smokers. A public perception of pod systems being a negative force could allow traditional vape companies to focus on converting smokers moving forward.

The nature of vaping looking to convert smokers has long been a successful market strategy. Despite acknowledgements by the FDA regarding the necessity of flavors in vape juices to stop them from returning to smoking, draft guidance was still issued to propose eliminating flavors. While it seems obvious that these fights will be tied up in the courts long past the August 8th, 2021 deadline, there still exists a salient public conversation to be had about traditional vaping and smokers. Those solutions will most likely have to be pursued legislatively and advance action by companies like JUUL doesn’t paint the most optimistic of pictures. Late in 2018, JUUL pulled its flavored pods from retail stores, a proactive action most likely aimed at getting ahead of an expected FDA decision to ban flavors from stores, but likely also a means to tamp down on both governmental and public perception that their selling of flavors in retail stores – particularly convenience and drug stores – was contributing to the perception of JUUL as being a driving force in the teen vaping epidemic. But, even a company as large as JUUL can be bamboozled by the workings of the FDA. Half a year later and no action has been taken by the FDA on the regulation of flavors, nor has the FDA begun to implement any actions on PMTA filings.

The requirements of filings for the PMTA is a testy subject in the vape industry. The reality is that very few vape companies have the expendable capital to explore the process of properly submitting a PMTA. While there is no conclusive literature supporting the material cost of an e-cigarette being accepted by the PMTA process, it is estimated that the process could easily reach into the millions of dollars for all of the requisite lab testing, toxicology reports, registration fees and supporting literature to bring through a successful application for each individual SKU that a company produces. Practically speaking, you could submit a SKU for vapor product for a PMTA for $20,000, but your chances of getting your product accepted are virtually non-existent thanks to the FDA’s ludicrously high standards of the acceptance of what they deem as tobacco products.

The Future of the Vapor Industry

All of this leaves an obvious picture of the future if the FDA sticks to its guns. As vaping companies shut down or transition away from vape into other industries, pod systems supported by the major tobacco manufacturers – colloquially referred to as Big Tobacco – will slowly become the vaping industry in America. The irony of this situation should be lost on no one as the aggressive efforts to regulate the vapor industry to address products that may be unsafe or a potential threat to the public well-being vis-à-vis the teenage vaping epidemic, would ultimately result in the very devices at the center of these controversies becoming the only thing available on the market.

It should come as no surprise to anyone that only multi-billion dollar juggernauts like Altria and JUUL Labs will end up being able to get their products through the expensive and time-consuming PMTA process. As they pare down their product offerings in preparation for future industry changes, they will be able to easily convert their products into FDA approved devices as the country complains about teens “JUULing” well into the 2020s, 2030s and beyond. While this may look grim in the United States, it doesn’t present a fatal outlook of the technology itself. Losing America as a market is a brutal hit for any industry, but the vapor industry remains strong abroad in Europe, Japan and China with markets rapidly growing in countries like Australia, South Africa and South Korea.

As vaping is explored scientifically into the future, additional large markets are primed and ready to open for legal sales in the Middle East (UAE) and Africa (Western Africa and Kenya). Vaping is not on a downswing by any measure globally. Investment in globally focused brands will keep companies founded in America operating internationally for many years to come. But it is hard not to lament the overly aggressive regulatory strategy, that seems almost market-tailored for Big Tobacco’s dominance to enter into the vape space. Vape was founded as a way to migrate society away from combustible tobacco. It was a cultural force for years before being hijacked and branded by the teen vaping epidemic. It seems profoundly sad that an industry born and developed in America could see itself become snuffed out by people rushing to judgements based off of one crisis while simultaneously doing everything but addressing the underlying issues with the crisis itself. But this isn’t to cast a shadow of gloom over the vapor industry. As has been said before, we’ll see the vapor industry continue to thrive for many years to come through legal challenges and protracted court battles from the traditional vaping industry’s largest juggernauts.

The future of vaping remains uncertain, but the genie is already outside of the lamp and vaping will forever remain a globally dominant market-force.

In addition to our original database (version 1), we have created a secondary database of vape shops in the UK by using the Search Engine Scraper and Email Extractor by Creative Bear Tech. This has allowed us to leave no stone unturned and scrape virtually all vape shops in the UK on Google Maps, most search engines such as Google and Bing, Business directories including Yelp and Yellow Pages, Vape Shop directories including allvapestores.com and allcbdstores.com, social media platforms, including Facebook, Twitter and LinkedIn. The version 2 of the database contains around 1,200 vape shops with email addresses as well as a separate file just with emails.

in B2B Databases of All Industries 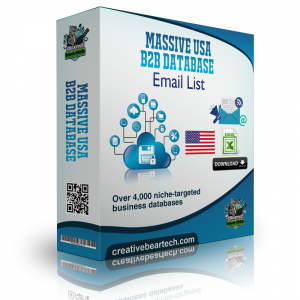 YELLOW PAGES SCRAPER AND EXTRACTOR SOFTWARE FOR USA AND UK

in Email Scraping and SEO Software 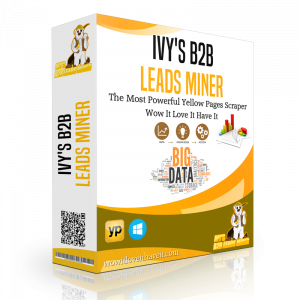 YELLOW PAGES SCRAPER AND EXTRACTOR SOFTWARE FOR USA AND UK